Some technicians tend to use the terms router, switch, and together, but have you ever wondered what the difference is? modem vs router vs switch vs HUB.

As mentioned above some of the technicians call it a router, hub, and switch, one minute they are talking about a switch and then discussing router settings the next minute. Throughout the conversation and their talks, though, they are still looking at only one box.

Let us discuss and define that what is the actual difference between these devices which are called interchangeably by many of the technicians.

Modem vs Router vs Switch vs HUB 2023 The Devices Defined

The functions of all three devices – the router, switch, and hub – are all quite different from one another, even if at some the times they are all integrated into a single device.

Now, let’s discuss which device should you use, and when do you use it.

What is a Router?

The router is a device that forwards the data packets along with the networks.

It is connected to at least two networks, which are commonly two LANs or WANs or a LAN and its ISP’s network. Routers are located at gateways which are the places where two or more networks are connected.

Routers use headers and forwarding tables to determine the best path for forwarding the packets, and they also use the protocols to communicate with each other and configure the best route between any of the two hosts.

What is a Switch?

In networks, the switch is a device that filters and forwards the packets between LAN segments. Switches function at the data link layer (layer 2) and at some of the times operate the network layer (layer 3) of the OSI Reference Model and therefore it supports any of the packet protocol.

What is the Hub?

A hub is a common connection point for the devices in a network. Hubs connect segments of a LAN. It includes multiple ports so that when a packet arrives at one port, it is then copied to the other ports so that all of the segments of the LAN can see all the packets.

The differences between these devices on the Network

Today, most of the routers have become something of a Swiss Army knife, which combines the features and functionality of a router, and witch-hub into a single unit.

So, the conversations which are regarding these devices can be a bit of a misleading – particularly to someone new to computer networking.

The features of a router, hub, and switch are all a bit different from one another, which at some times, are considered to be integrated into a single device.

Let us start with the hub and the switch as these are the two devices that have a similar role on the network.

The Hub and Switch Have Similar Roles

Each of these devices serves as a central connection for all of your network equipment and it handles a data type which is known as frames.

Frames are the ones that carry your data. When a frame is received, it is then amplified and transmitted on to the port of the destination PC.

The biggest difference between these two devices is that the method in which the frames are being delivered is different in both of these devices.

In a hub, a frame is passed along or “broadcast” to every one of its ports. It does not matter that the frame is only meant for one port. The hub has no way of differentiating that which port a frame should be sent to.

Passing it down to every port makes sure that it will reach its intended destination. The places a lot of traffic on the network and it can lead to poor network response at some of the times.

In addition to that, a 10/100 Mbps hub must share its bandwidth with every one of its ports. So when only one PC is broadcasting, it will have access to almost the maximum available bandwidth.

If, though, multiple PCs are broadcasting, then that bandwidth will then need to be divided among all of those systems, which will then degrade the performance.

Whereas, a switch keeps a record of the MAC addresses of all of the devices which are connected to it. With this information, a switch can recognize and identify which system is sitting on which port.

So that when a frame is received, it will know exactly which of the port to send it to, without considerably increasing network response times.

And unlike a hub, a 10/100 Mbps switch will allocate a full 10/100 Mbps to each of its ports. So despite the number of PCs transmitting, users will always have access to the maximum amount of bandwidth. It is for these reasons that a switch is considered to be a much better choice than a hub.

Routers are completely different from these devices. Where a hub or switch is concerned with transmitting the frames, a router’s job, as for its name implies, is to route the packets to other networks until that packet ultimately reaches its destination.

One of the key aspects or features of a packet is that it not only contains data, but it also contains the destination address of where it is going.

A router is typically connected to at least two networks, which are commonly two Local Area Networks (LANs) or Wide Area Networks (WAN) or a LAN and its ISP’s network – for supposing, your PC and your service provider.

Routers are located at the gateways, which are the places where two or more networks are connected. Routers use protocols such as ICMP to communicate with each other and configure the best route between any of the two hosts.

Difference between a modem and a router 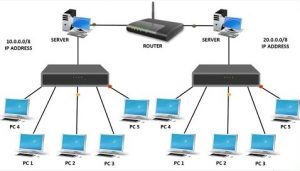 Now let us discuss what is the difference between a router and a modem.

If you have been on the Internet for a while you have then surely heard of the terms “modem” and “router” which are thrown around, but you might not have taken the time to understand what they are. Well, why worry? I am here to help you.

To describe the difference between a router and a modem, in short, is that the router creates a network between the computers in your home, whereas your modem connects that network – and hence connects computers on it to the internet.

When you connect to Wi-Fi, you are connecting to your router, which forwards the traffic between the internet and your computer. Many of the internets provide offer a combined modem and router unit which performs the tasks and functions of both devices.

What does a Modem do?

Your modem serves you as a bridge between your local network and the Internet. Historically, the term “modem” is a shorthand for the modulator-demodulator.

The modem plugs into whatever type of infrastructure you have like cable, telephone, satellite, or fiber – and it offers you a standard Ethernet cable output that you can plug into any of the routers (or a single computer) and get an Internet connection.

As the modem communicates with your Internet service provider, you will need the correct type of modem which will then work with your ISP’s infrastructure.

What did a Router do?

A router connects to multiple networks and routes the network traffic between them. It is this simple. In the situation of your home network, your router has one connection to the Internet and one connection to your private local network.

In addition to that, most of the routers also have built-in switches that let you connect multiple wired devices. Many of them also contain wireless radios which let you connect Wi-Fi devices.

The simple and easy way to think about routers – particularly on your home network is like this. The router sits in between your Internet connection and your local network. AmazeInvent

It lets you connect multiple devices to the Internet through one of the physical Internet connection and it also lets those devices communicate with one another over the local network.

In addition to that, the router offers some of the protection to your devices over which is being exposed directly to the Internet.

To the Internet, all of the traffic coming from your house looks like it is coming from a single device. The router also keeps a track of what traffic goes to which actual device on your network.

But you cannot connect directly to the Internet with just a router. Instead, your router must be plugged into a device that can transmit your digital traffic over whatever type of Internet connection you are having. And that device is called a modem. 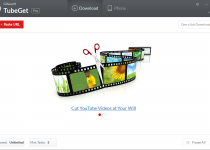