Leaving the system running may cause your computer to work as long as.

However, they should consider the causes behind the slow performance, as it could be that the CPU is overburdened with things. 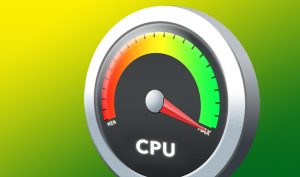 If someone is running multiple programs and processes at the same time, then the CPU is going to slow down.

CPU stands for central processing unit and is the core of the device. So, if the CPU is out of capacity, can you do anything?

When a CPU becomes incapable of performing tasks, then its performance starts to suffer.

It would be a surprising fact for you that, most computers use less than 5% of their CPU! When you are playing a game or working on an application, there would be a sudden, but a temporary spike in CPU usage. When the intensive process is over, then the CPU usage drops again.

If the computer is using about 100%  of the CPU’s usage, then it will have to free processing power, over and over, and this slows down the computer.

To know how much CPU the computer is using, all the user has to do is open Windows Task Manager.

For this, they have to press control, Shift and ESC at the same time, and then click on the Performance Tab option.

This tab offers as to what could be contributing to the problem, and space each application is taking.

The user will learn about the applications that take more power and RAM, and how CPU usage can be lower down. If an application is using disproportionate resources, then that resource can be stopped.

When you look at the Processes tab and figure out that there are no highly demanding apps, then this could be a bug. There are some common causes of high CPU usage, those plague computers. This article is further going to look into those causes.

This is a very important part of Windows, and it runs in the background.

This process is used for monitoring the systems on a network. If the CPU usage of this host process is higher than a few percentage points, then this means that there is a bug in the system.

The first solution for this problem is to turn off the process, and then turn it on. There is a Windows Search facility in your PC, and you need to use it to find services.msc.

From that, find Windows Management Instrumentations, right-click and then click on Restart. The service will restart; if you don’t want to go through this, then restart your PC.

If the bug isn’t fixed, then you are dealing with another problem. First, go to Windows Even Viewer and choose Applications and Service Logs from there.

Then go to Microsoft, Windows, choose WMI Activity from there, and click on operational.

There, you will find any error entries made recently, and you can take down the ClientProcessID for each error.

Return to the Task Manager and then the Services tab again. You can sort the list by using a process ID. If you want, you can run the list again, so that you can identify why the computer is malfunctioning.

There are background processes on every computer. Even if the user has not opened a window, these processes are running in the background, and they take up a certain percentage usage of the CPU.

As the user download more applications and programs, these background processes start to accumulate.

Every computer has an antivirus program, to be on the safe side. However, in most cases, the antivirus of the PC is the cause behind a slow central processing unit.

It could also be because of a virus that the antivirus program was unable to stop. For this, you need to scan your hard drive, to find out potential threats.

Viruses can take a great amount of CPU power, particularly if the user has an older device or operating system. If the device starts to lag, then this could be the antivirus eating the load of the processor.

There could be a piece of malware inside the PC, which is sucking the processing power of the CPU.

This piece of malware might be running many background processes, or it can spread through social media and email as well.

Sometimes, just scanning the whole computer through antivirus is not easy, as some malware can hide pretty well.

This malware is called anti-forensics, and they can’t be detected with the help of security software.

Users can either run multiple antivirus tools on their computers or perform a manual virus search and removal procedure.

You can also see the recommending way: here

If you have Windows (any version), then you can easily check the running processes on your PC.

All you have to do is open the task manager, by pressing control, alt, and delete altogether. In the Windows Task Manager window, you will see processes next to applications.

The processes running in the background will open, along with their CPU usage, memory, and description. From this window, you can figure out which processes could be slowing down your computer.

If a process is using too much CPU usage, then you can click on the End Process and that process will go away. AmazeInvent

However, when you open the Task Manager, make sure you understand all the processes that are running. You wouldn’t want to kill any program that you are using, or which has important unsaved data.

Add this program in the Dock, so that you can see the processes daily.

When you open the activity monitor window, you will be able to see the name of the process, its CPU usage, threads, real memory, kind and virtual memory.

If you see a process taking too much space on the CPU, then you can simply click on the Quit Process option. This way force quit the process and will free up the CPU percentage. In Apple’s Activity Monitor, you can also see a floating CPU usage window.

This window shows the user how much space all the processing cores of the PC are using. This is particularly helpful for high-end users, like video and audio editors.

Ending processes might work in some cases, but sometimes the real issue is the drivers installed. You can manually update the drivers, or do that automatically.

For manual updates, open the website of the manufacturer and search for a recent version of the drivers for your device.

If you want to automatically update drivers and you have the patience for it, then install Driver Easy. When you run Driver Easy on your PC, it will scan the drivers, and then point out the problematic drivers.

When you see the problematic drivers, click on the update next to the driver, and install it manually.

You can click update all, and the new version of the drivers will install automatically.

However, this feature is usually available in the paid version of the software.

In case your computer is affected by slow speed and performance, then you need to defragment the hard drives.

When you access or delete a file, the hard drive becomes fragmented. When this period of fragmentation extends, then the CPU starts to slow down.

For defragmenting a hard drive, open Windows Explorer and right-click on the affected disk. Select the properties tab, and then click on the Tools tab.

There, you will find the ‘defragment now’ option, and that will start the process of defragmentation. The amount of time that it takes to defragment the hard drive depends on the size of the disk.

When you are using your PC, make sure that you don’t run more than two programs at the same time. This way, your CPU will have enough free usage space, and that will keep the speed of your PC appropriate.

If you are facing too much waiting time on loading programs, then it is time to address the CPU usage issue. In case you keep on working and don’t address the issue at hand, the problem will persist.

It is best to delete programs and applications that employees no longer use. Employees can easily do this by visiting the control panel on their PC and deleting the applications which have not been used for a long time.

For those who are using Windows 10 on their PC, the issue of CPU usage can be caused by Cortana. Enabling Cortana means that your CPU is bearing the burden. If you use Cortana sometimes or never, then you need to modify settings in the Registry Editor.

From your keyboard, press the Windows logo and the letter ‘R’ at the same time. A window will open, where you have to type Regedit, and press Enter.

It will open the Registry Editor. When you are asked for permission, click on Yes.

Go to HKEY Local Machine, from there, choose a system, then-current control set, then services, and finally time broker. On the right-hand side, you will see the Start option; right click on it and choose the modify option.

When a window opens, change the value data from the current value to 4, and then save the changes made. However, if you use Cortana daily, don’t change the value and move to the next solution.

If you have a P2P share on Windows 10, it will have an impact on your CPU usage issue. You can disable this feature and see if it gets fixed. Follow the steps below:

Most of the time, the user is not aware of the applications and programs that are running in the background.

They want to extend their hard drive space or get a new laptop, but by learning about CPU usage, they can solve this issue without any hassle.

Make sure you don’t have a virus or bugs on your PC or laptop. Also, don’t download applications and programs, which you don’t use much and are heavy for your CPU.

Why is my CPU used so much?

If the CPU usage is around 100, it means that your computer is trying to do more than its potential.

This is usually fine, but it does mean that programs can be a little less expensive. Computers use about 100% of the CPU when they are doing things with computational capacities, such as running games.

How can I reduce CPU usage in games?

The only way to reduce CPU usage is to lower your framerate.

If it says 100 degrees or something, feel the ribs of the CPU cooler, at the same time they should be very hot, if they are not hot then you know that it is not connected properly.

If the CPU usage is around 100, it means that your computer is trying to do more than its potential.

This is usually fine, but it does mean that programs can be a little less expensive. … If the processor has been running at 100% for a long time, it can make your computer annoyingly slow.