Close all your Chrome windows, open a fresh window and check RAM usage and make Chrome not use so much ram of my computer.

Now open a fresh incognito format window (then close the normal window that was opened earlier).

Does Chrome now use significantly less RAM? If this happens, the problem may escalate.

This browser is taking place in each and everyone’s computer and smartphone nowadays because it is said to be relatively fast, durable, and lightweight if compared to other common browsers.

Google Chrome is no doubt one of the best and most popular web browsers used and admired by people all around the world.

Some people have filed a complaint about Google Chrome which uses an excessive amount of the RAM of your computer.

If you guys don’t know, then I will tell you that Microsoft has recently announced something very hard to have even an idea for. Microsoft has announced moving the Microsoft Edge to the Chromium engine, which is a very impressive thing.

The usage of an excessive amount of RAM makes the browser as well as the computer very lazy, and slower and it affects the overall performance and experience of the users of these devices.

Imagine that if you open your task manager and all of a sudden you see a shocking and huge number of RAM being used by the processes of Google Chrome. This will surely worry you and if you have gone through this, I can understand everything.

If you have used, researched, and tested other different browsers, then you must be aware of the fact that Google Chrome is always found at the top of the list whenever you go to the task manager or Activity Monitor.

Many questions will take place in your mind like is Google Chrome using more RAM or not, and some other questions as well.

Do you even know why Google Chrome uses so much RAM, especially when compared to other common browsers? And do you know how you can stop Google Chrome from demolishing your RAM?

Reason Why Does Google Chrome Consume So Much of Your RAM?

First of all, I would like to ask you, people, how do you get to know that Google Chrome is using so much of your RAM? You get to see a message on your Google Chromethath that says, “Aw, Snap! Google Chrome ran out of memory while trying to display the webpage.”

Every application on your computer or even any action that has been done on your PC runs a lot of processes on your RAM to keep proceeding with the functioning of that application further.

RAM is where all the hard work of your computer is running and takes place, it works as a temporary storage device for all kinds of data stored inside it and it functions very fast as well.

It is researched and tested that your Personal Computer can access the data which is held in the RAM of your system. It is said that the RAM is much faster than a hard drive itself or even an SSD (Solid State Drive).

All these commonly used browsers like Google Chrome, Mozilla Firefox, and Opera, all of these browsers store every tab you ever open, plugins you have installed, and extensions as well. All of this is stored in a different RAM process.

This storing process on RAM is called isolation and this process prevents one process from writing to another. All these things then result in lagging and other several issues as well.

Whenever you will open the Task Manager or Activity Monitor on your personal computer, you will find these modern browsers, namely Google Chrome itself, Mozilla Firefox, and Opera on the top or they will be displaying multiple entries.

If you inspect your Task Manager closely, you will be able to see that each process uses a very small amount of your RAM, but whenever you add them up, the load gets very high accordingly.

How Does Google Chrome Manage RAM?

RAM is used in many senses, it is consumed by running every process separately and if any one of these processes crashes, still the entire browser remains stable.

Just like these processes, sometimes a plug-in or extension will fail which requires you to refresh the tab to have access to that page again. And if you are stuck in a situation where every tab and extension was running in the same process, then you will have to restart the whole browser to solve this issue, instead of restarting one single tab.

There are a lot of downsides to this process, one of those is that some processes in which single-process browsers can share between tabs must be simulated for each tab in this Google Chrome.

There are many security benefits you can achieve by splitting into multiple processes. It is similar to sandboxing or using a virtual machine.

However, if your Google Chrome is using too much RAM then you should probably look out for a solution before it turns into a problem because when Chrome uses too much RAM, it limits the available amount for other programs. This is why it should be considered and solved.

How to Reduce the Usage of RAM by Google Chrome? 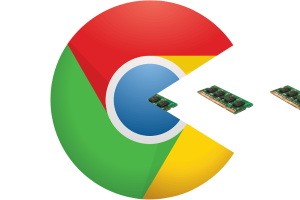 Though, there are several ways you can use to reduce the amount of RAM being used by your Google Chrome browser and speed up your browsing experience as well.

I will be sharing with you some of the ways to solve this issue and one of them is by using the Chrome Task Manager which is said to be the most important tool at your disposal.

Just as similar to the Windows Task Manager, this tool, namely Chrome Task Manager displays the status of performance and consumption of each tab opened in your Google Chrome browser and all extensions which are installed within the browser.

You can use this Chrome Task Manager to figure out the status of the performance of your Chrome browser and what in this Google Chrome is using the most RAM. Then what you have to do is, simply close them to free up space and release RAM.

If you have a Windows operating system device then just press SHIFT+ESC inside the Google Chrome browser to access the Task Manager. You can follow this guide too: here

If you have a Mac operating system device then you will need to open the Task Manager from the Window menu. And then select the process which is consuming most of the memory and then hit END PROCESS.

Always look for the tabs and extensions which have blown up in size whenever you face such a problem in Google Chrome. Sometimes even a single tab on Google Chrome can use a lot of memory due to some bugs or poor configuration, it depends.

Once you are done with terminating all the things and processes which were consuming a huge amount of power from your RAM, there are other things to do as well.

Another way you can use to solve this particular problem is by using Google Chrome Flags to manage the usage of RAM.

Google Chrome has some undisclosed, often experimental features which are known as “FLAGS”. If you use one of these flags it will enable the feature of Tab Discarding capability.

This feature of tab discarding is used to automatically discard background tabs from your Google Chrome system memory when it is low and required.

When you use this feature of tab discarding, it doesn’t discard the TAB completely as the tab remains in that place, but it won’t load or display anything until and unless you click on it.

Does Chrome use too much RAM?

and of course. The more tabs and extensions you have installed, opened, and run, the more memory you will use.

So yes: Chrome uses a lot of RAM, but it does so for the most (good) reason: at your convenience.

How much RAM should Chrome use?

Each new tab that is opened in the browser will use more RAM.

In Chrome, 15 tabs can be used from 1 GB to 2 GB of memory, depending on the content of the media.

Why is Google Chrome using all my memory?

Unfortunately, malicious Chrome extensions, poorly designed extensions, or extension monetization have become so commonplace that Google Chrome uses too much CPU or memory on a computer.

This can cause Chrome and Windows to slow down, freeze, or crash.

Is 8GB RAM enough for Chrome?

For those who are always researching or need a lot of Chrome tabs or playing games from 2010-to 2015, 8 GB RAM is enough.

Scientists, gamers, and content creators have preferred 16 grams of RAM, although they should be fine with 8 GB until the graphical settings are maximized.

Does Mozilla use less RAM than Chrome?

Firefox doesn’t use as much RAM as Chrome. And while that doesn’t detract from your ability to do more at the same time, Firefox launches a balanced attack using four contents at any one time.