Alex, known as YandereDev, is a 32-year-old game developer from the United States. He has worked extensively with so many companies and some were even unknown.

He worked on the game and the mobile games application as well. YandereDev used to develop simple videogames with its own ideas and character development.

In 2008, he became so serious in videogame creation. Before working on the Yandere simulator, he worked on so many prototypes, but for a great platform to do something massive, he needed 3D models.

At the time, there were no such models, when searching for models he saw very cheap school girl character models. He told his friend about it and he figured why I couldn’t make her a serial killer?

He launched the idea at a major forum. Many people have appreciated it and have given many good ideas. It sounded as if people were really interested. It is here that YandereDev thought, this can be an interesting idea to develop.

He usually updates it after a month or two and works around the clock with a couple of volunteers. He was always uncertain about his appearance, which is why it took him so long to reveal his identity. It was insecure about always dark circles under his eyes.

It mainly shows its appearance in Ayano Aoshi which is an avatar that he did to represent himself. Basically, the Yandere simulator is a game about an online school girl who is so crazy in love with her crush that any girl who cares to draw attention to that boy. She can kill them, or she can do her crush to hate them and so much more.

She has an innocent personality in school and everybody knows her so she has to make her good reputation as well while doing all this. It can wipe the blood off with a mop or else someone can take pictures of her in front of the school or police station.

Yandere simulator banned on twitch while having some other games “Hypocrisy” we would say.

So, after the introduction, let’s discuss how to download the Yandere simulator.

There are just two ways of downloading the Yandere simulator. Use the launcher or use the WordPress blog. 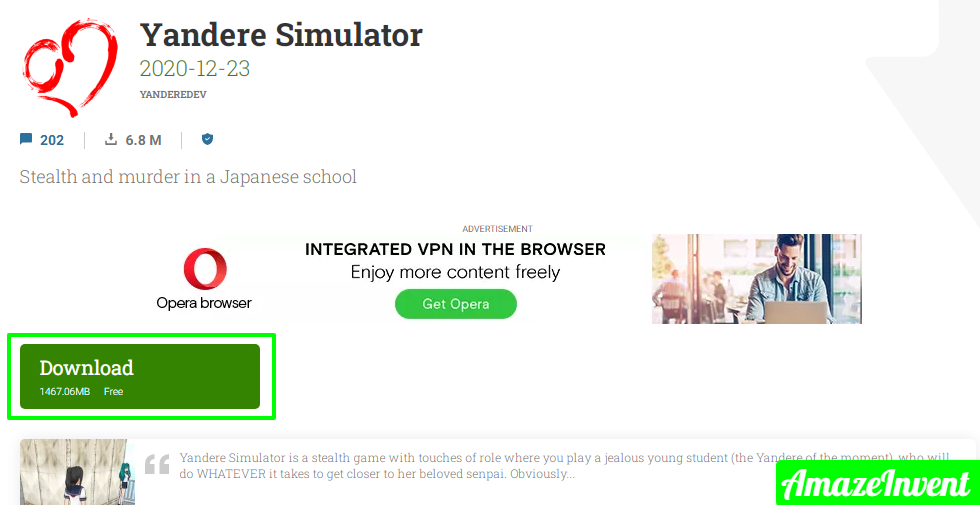